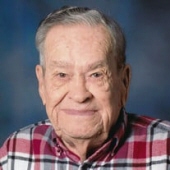 Homer Eugene Williams was born on October 16, 1922, in Joplin, MO, to Walter and Goldie (Miller) Williams. After his younger years, Homer enlisted in the U.S. Army where he received his GED. He served in World War II and he was a Pearly Harbor survivor. He met his wife, Walburga M. Pohl, while serving in Austria. They came back to the United States and were married on December 30, 1955, in Olympia, WA. Homer redeployed to Germany and while there, they had their first and only son, Gregory. Homer served faithfully and honorably for over 20 years before retiring and moving to Minnesota.

Homer worked for most of his life as a land surveyor. His hobbies included chopping wood, fishing, and camping.

Homer was loved by his family and will be forever missed.

To order memorial trees or send flowers to the family in memory of Homer E. Williams, please visit our flower store.