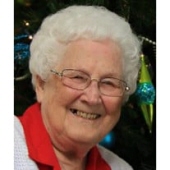 Helen Wagner was born in Fisher MN, on May 29, 1931, to Lawrence "LD" and Lilly Wagner. She graduated from Fisher High School in 1949. She was the first female freshman to attend the senior Prom, and the gentleman that invited her became her husband. While in high school Helen played half-court basketball.

In the early 1960s Helen was a candy maker at Ideal Candy Co. in Fargo, ND, which was owned by the Puffe family. For the past 40 years Helen was the bookkeeper at Puffes Fine Jewelry.
Helen was involved in many organizations: Oak Grove Grover Club, Fargo-Moorhead Quota Club, Moorhead Lioness Club, and the Moorhead Country Club. She was very involved with her church, where she taught Sunday school, LWML, attended District and National conventions, Ladies Guild and on Wednesday afternoons, did quilting for mission projects. She also was a ticket seller for the church's annual Turkey Supper.

Helen's love of family found her traveling to sporting events, concerts and theater productions. Her favorite time of year was the Christmas season, which found her baking cookies, breads, and pies. It was heartwarming for her when her grandchildren joined in for a two-day baking marathon. Sprinkles are to go on the cookies, not on the floor.

Visitation will be Sunday, December 11, from 5PM to 7 PM, with a prayer service 7 PM, in Korsmo Funeral Chapel, Moorhead. The funeral service will be Monday, December 12, 2016, at 11 AM, in Our Redeemer Lutheran Church, Moorhead.

To order memorial trees or send flowers to the family in memory of Helen Puffe, please visit our flower store.