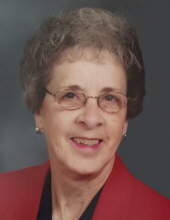 Helen Marie Kelly (Gutzwiller) passed away peacefully on August 8, 2022, at the age of 90 years and 6 months.

Helen had a great faith, a belief in God, and is now resting in the gentle arms of her Lord and Savior. She was born to Bill and Mary Gutzwiller in Hibbing, MN, on February 7, 1932. After graduating from Hibbing High School in June of 1950, she worked at Erickson Lumber in Hibbing for several years.

On June 16th, 1956, she married Gordon Kelly. They resided in Hibbing for several years before moving to Moorhead, MN where they raised their three boys. Helen worked in the school district as an assistant to the school nurse while Gordy worked as a carpenter/foreman for Meinecke-Johnson.

Helen enjoyed cooking, baking, taking care of her flowers, reading and of course, spending time with her family and friends.
She was very active in numerous organizations at St. Joseph’s Catholic Church. There were various vacations with Gordy along with several road trips with her sisters.

Helen was preceded in death by her parents; husband, Gordy (2015); son, Kevin; sisters, Kathryn Kennedy (John), Florence Techar (Bill), Louise Ochsner (Larry); and Ruth Hanley. Helen was a loving daughter, sister, wife, mother, grandmother, aunt, and friend. She will be greatly missed by all of the people whose lives she touched.

Mass of Christian Burial will be on Monday, August 22, 2022 at 11:00 am in St. Joseph Catholic Church in Moorhead, MN. Visitation will be one hour before Mass.

The family requests donations in Helen’s name to: The Great Plains Food Bank in Fargo, the Roger Maris Cancer Center in Fargo, or the donor’s choice.

To order memorial trees or send flowers to the family in memory of Helen M. Kelly , please visit our flower store.