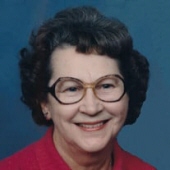 Helen Ingeborg Skurdahl, the daughter of Otto and Helga (Thompson) Skurdahl, was born in Aneta, ND, on January 17, 1919. She grew up and received her education in the Aneta area. At the age of 16, she moved to Fargo, ND, where she worked as a housekeeper and nanny for a local family, and as a clerk in the Dutch Maid Ice Cream Shop.

In 1944, Helen was married to John Tveiten. They made their home in Fargo and had four children. John died tragically on August 11, 1957.

Throughout her long life, her faith in Jesus Christ was important to her. She was a faithful member of St. Paul's Free Lutheran Church, Fargo.

In addition to husbands John and Larry, she was preceded in death by her parents, and by five siblings.

A visitation for Helen will be held on Thursday, December 19, 2019, from 10 AM until 11 AM, in Korsmo Funeral Chapel, Moorhead. A Prayer service/Sharing of Memories will be held at 11, and then Helen will be buried in Riverside Cemetery, Fargo. A celebration of Helen's life will be held in the springtime at St. Paul's Free Lutheran Church, Fargo.

To order memorial trees or send flowers to the family in memory of Helen I. Larson, please visit our flower store.