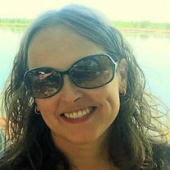 Gretchen grew up in north Moorhead, where she attended George Washington Elementary. At school she formed a number of lifelong friendships with peers and classmates, and encountered several devoted educators who would inspire her love of learning, shape her deep commitment to fairness and equality, and spark her curiosity about the world.

As a teenager, Gretchen loved working for Bob and Phyllis Litherland at the Moorhead Dairy Queen, where she made more friends, mixed malts, dipped Dilly Bars, and - as her friend Jody liked to say - solved the world's problems.

At Moorhead High School, Gretchen continued to apply her rapidly expanding intellectual skill set to every subject, and she graduated as valedictorian of the class of 1992. She was accepted to Stanford University, but elected to remain close to family and friends when offered a full four-year honors apprentice scholarship to Minnesota State University Moorhead. She completed a degree in math education with minors in women's studies and English.

Upon graduation, she briefly taught middle school mathematics before commencing work in statistics, data analysis, and SAS programming for PRACS Institute, North Dakota State University, and Noridian. She earned a master's certificate in statistics from NDSU in 2004. Her passion for numbers and analytic problem solving extended from Gretchen's career to her free time.

In 1996, Gretchen met Rob Kost by chance over a game of billiards. Despite Rob's victory - he ran the table - Gretchen agreed to join him for a late-night breakfast at Perkins. The two married on July 25, 1998 at Gethsemane Cathedral under a bright blue sky. Following the ceremony, Gretchen drove Rob to the reception in her father's 1928 Model A Ford.

The unexpected diagnosis of an inoperable brainstem tumor on May 28, 2004 interrupted Gretchen's life, but she, Rob, Kathy and Bruce, along with the support of family and under the expert care of Dr. Nathan Kobrinsky, pursued an aggressive course of treatment. Regular visits from Father Jamie Parsley, whose counsel, prayers, and anointing of Gretchen in Christ lifted and sustained her, also developed into a deep and permanent friendship. Against the odds, Gretchen survived, and referred to February 22, 2005 as Kicking the Tumor to the Curb Day.

Cancer-free and encouraged by Dr. Kobrinsky to resume regular pre-diagnosis activities, Gretchen and Rob adopted their beautiful baby girl Hattie in 2008. Eighteen months later, their family expanded once again with the adoption of handsome little brother Beck. Gretchen steadfastly annotated the development of the children, documenting memories like the time she observed Hattie playing with a toy medical kit. Gretchen asked, "Hattie, are you going to be a doctor when you grow up?" Hattie responded, "I'm a doctor now. When I grow up I'm going to be a cowgirl or a princess. I will ride a horse and Beck will ride a cow."

As Hattie and Beck grew, Gretchen and Rob enjoyed outings to the lake cabin on Little Pine, where they spent happy hours fishing, tubing, swimming, and boating. Each fall, the quartet relished their visits to Maplewood State Park to gaze at the gorgeous foliage blazing in hues of red, orange, and gold. Grandma Betty and Grandpa Dennis looked forward to every road trip the family made to their farm in Washburn, North Dakota. Horse-drawn sleigh rides in the winters and bankside views of the Missouri River in the summers were among the highlights.

When residual effects of the radiation began to compromise Gretchen's balance and vision in the spring of 2016, she met the challenges with a cheerful attitude and good humor. Even as her health declined, she never wavered from warm smiles, optimism, and grace. The entire staff at Sanford Medical Center went above and beyond, providing exceptional care and compassion as Gretchen completed her earthly journey.

In lieu of flowers, memorials in Gretchen's name can be made to the Roger Maris Cancer Center or Gethsemane Cathedral.

A Gathering of Friends for Gretchen will be Friday from 5 PM to 7 PM, with a Prayer Service at 7 PM, in Korsmo Funeral Chapel, Moorhead.

Her Memorial Service will be Saturday, February 4, 2017, at 10 AM, in Gethsemane Episcopal Cathedral, Fargo.

Burial will be in Riverside Cemetery, Moorhead, MN.

To order memorial trees or send flowers to the family in memory of Gretchen K. Kost, please visit our flower store.