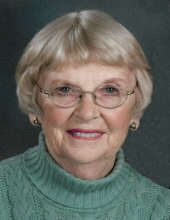 Gerry was born on July 18, 1928, to Gilbert and Leva (Nelson) Western in Fergus Falls, MN. She grew up in Rothsay, MN, and graduated from Rothsay High School in 1946 and attended Concordia College in Moorhead, MN. She was married on October 22, 1950, to Sid Engelstad in Rothsay.

Gerry worked for the Fargo Clinic as a Medical Stenographer for 42 years. She was able to take summers off to be at her lake cabin on Crystal with her family. After retirement, Gerry and Sid spent many winters in Naples, Florida. She loved traveling and went to Norway with Sid and Europe and Hong Kong with friends.

Gerry was preceded in death by her husband, Sid, and her parents, Gilbert and Leva (Nelson) Western.

She is survived by her children Sherri (Pat-preceded in death) Wenino, Deb (Rick) Anderson and Jeff (Lez) Engelstad. Gerry had one brother, Dale (Marian) Western, both preceded in death. She loved spending time with her family which also includes seven grandchildren; Chris (Brooke), Jon, Dan, Brian (April), Brad (Ashley), Michelle (Wesley), Jace; and 10 great-grandchildren and many nieces and nephews.

Gerry’s Funeral Service will be 2:00 PM, Tuesday, October 4, 2022, in Lutheran Church of the Good Shepherd, Moorhead, with a visitation one hour prior to her service.

A Graveside Service will follow at Evergreen Memorial Cemetery, Moorhead.

To order memorial trees or send flowers to the family in memory of Gerry L. Engelstad, please visit our flower store.