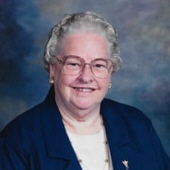 Geneva A. Kuehl was born October 4, 1929, in Glyndon, MN, the daughter of Hans and Millie (Buth) Kuehl. Geneva was raised in the Glyndon area and attended school in Glyndon as well as Moorhead, MN. In the early 1940s, she worked at Cass-Clay Creamery.

On May 28, 1949, Geneva was united in marriage to Edwin "Ed" Plummer, at St. Francis de Sales Catholic Church in Moorhead. Geneva and Ed were one of the first couples married at St. Francis, where they continued to be members. They established their home in Moorhead where they raised their three children.

Geneva continued to work for Cass-Clay for eight years, at which time she wanted to stay at home and be there for the children when they came home from their day. When the last child started grade school, she started working in the cafeteria at St. Francis school, where she continued until her retirement in 1987.

Geneva was involved in her children's lives with Boy Scouts of America as well as Camp Fire Girls, where she was a co-leader. Geneva was a member of Christian Mothers, at St. Francis de Sales Catholic Church. After they retired, Ed and Geneva enjoyed traveling, until his death on March 30, 1998.

In addition to her parents and husband, Geneva was preceded in death by her son, Richard; sisters, Luella Halborjhus, and Marcella Leach; and brothers, Leroy, Virgil "Stretch," Wilbert "Hap," and Gerald Kuehl.

Burial will be in Sunset Memorial Gardens, Fargo.

To order memorial trees or send flowers to the family in memory of Geneva A. Plummer, please visit our flower store.