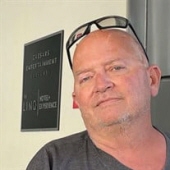 To view the recording of Gary's Funeral Service click on the following link: https://portal.midweststreams.com/services/iframe/21044

Gary Allen Pearson was born September 26, 1960, in Pelican Rapids, MN, to John and Avis (Martinson) Pearson. Gary attended elementary school in Sabin, MN and later moved with his family to Moorhead, graduating from Moorhead High School in 1979. Gary played football and baseball for Moorhead High School, as well as baseball for the Moorhead American Legion Post 21 Gold and Blue teams. He also played fast pitch softball out of high school. After high school he worked for Nodak Stores Inc. of Fargo,ND. He later accepted a position with Northern Improvement. Gary worked as a Grading Superintendent for Northern Improvement/McCormick Company throughout the United States, from North Dakota to Oklahoma, Arkansas and ultimately settling in Arizona.

In his spare time, Gary enjoyed golf, especially golfing in tournaments, hunting, fishing, and watching sports. He excelled at billiards and loved playing card games with his nieces and nephews during Christmas. He was also the official popcorn ball tester during the holiday season. Gary lived a simple life, often keeping to himself, but enjoyed staying connected with his family as much as possible. He enjoyed the occasional trip to the casino, reading a Louis L'Amour western novel, listening to country music, and playing his guitar.

He was preceded in death by his father, John, as well as several aunts, uncles, and cousins.

Visitation for Gary will be held Monday, June 21, 2021 in Korsmo Funeral Chapel from 5pm-7pm. Funeral Service will be Tuesday, June 22, 2021 at 11am in The Lutheran Church of Christ the King, Moorhead. Following the service, Gary's family is inviting those in attendance to join them for a lunch in the Minnesota Room at Korsmo Funeral & Cremation Service.

To order memorial trees or send flowers to the family in memory of Gary A. Pearson, please visit our flower store.