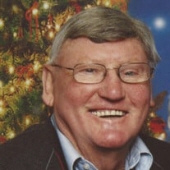 Due to technical issues, we were unable to livestream Fred's service. For a recorded version, please follow this link:
https://portal.midweststreams.com/services/iframe/19533

Fred grew up in Minnesota and spent his entire life in Minnesota except for a tour of duty in Korea. He was inducted in January of 1951 and was discharged in February of 1953. Following his service, Fred farmed in Moorhead, MN,

Fred married Marian Herbold on March 14, 1953, in Fargo and in 1956, bought a farm near Borup, MN, which is still owned and operated by the family. Fred began a second career as an auctioneer in the 1970s, handling estate and farm sales throughout the region. Fred and Marian loved to travel and were among the first visitors to China, when it opened to the world.

Fred spent several extended periods of time in the Ukraine, supporting and assisting local farmers. He was president of the Minnesota Wheat Growers Association, where he travelled extensively to other countries promoting Minnesota wheat. Even after Fred retired from farming, he still loved to plant a field of flowers near the house.

Another of Fred's passions was buying and selling automobiles. He loved to attend the car auctions when he wintered in Florida. Fred died Thursday, January 21, 2021, in New Perspective Senior Living, West Fargo, ND, at ninety-three years of age.

Visitation will begin at 3 PM, with a Life Celebration Service at 4 PM, Sunday, May 16, 2021, in Korsmo Funeral Chapel, Moorhead. If unable to attend, Fred's service will be livestreamed.

To order memorial trees or send flowers to the family in memory of Fred L. Kreps, please visit our flower store.