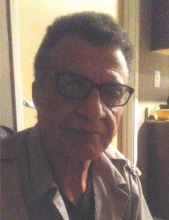 Fred Lee Burrage was born January 13, 1948, the son of Charles and Girlee (Griffin) Burrage, in Wazoo City, MS. He was raised there and graduated high school. He later moved to Chicago and over the years worked in construction, as an auto mechanic, and a handy-man. Fred later moved to Moorhead where he has since made his home.

He enjoyed socializing with family and friends and loved watching sports, especially the Chicago Bulls.

He was preceded in death by his parents; and brothers, Charles and Luther.

Private family services will be held.