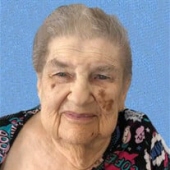 Florabelle Wagner was born July 1, 1929, in Moorhead, the daughter of Richard and Minnie (Wethern) Wagner. She was raised in Moorhead where she attended school. Flora then moved out to Montana where she worked as a nanny and housekeeper for a few years before returning to Minnesota.

On July 23, 1948, Flora was united in marriage to Wallace Wright in Moorhead. They established their home in Moorhead and she worked at Manchester Biscuit Company. In 1966, she began working as a care specialist at Eventide Lutheran Home, retiring in 1992, after twenty-six years in 1992. Wallace died September 10, 2018.

Flora enjoyed knitting, playing cards, and was an excellent cook and baker. She had a great love for people, especially for her children, grandchildren and great-grandchildren.

She was preceded in death by her parents; husband, Wallace; brothers, Floyd and Stanley; sister, Primrose Friese; and two infant sisters.

To order memorial trees or send flowers to the family in memory of Flora B. Wright, please visit our flower store.