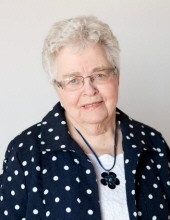 Evonne Julia Livdahl Anderson was born on the family farm near Rustad, MN, on April 6, 1924, along with her older, twin sister, Eva, to Ruth Otelia (Backlund) and William Ole Livdahl. She attended school in Rustad, Comstock and Moorhead. Since there was no school bus service, Evonne and her twin (Eva) lived in a rooming house while attending Moorhead High School where she graduated in 1942.

As a young lady, she worked at S & L Clothing Store, Western Auto Parts, House of Mercy, a home for unwed mothers, and the most fun job was at the Comstock Post Office. Evonne attended Lutheran Bible Institute in Minneapolis, MN, in 1948; she later was on the Board of Regents. She also took care of most of the babies born in the Rustad – Hickson area; even staying with families and helping with household chores.

Her fiancé (Pete Olsgaard) tragically died in a farm accident in 1946, whereafter Evonne spent time in California working at a furniture manufacturer.

She married Erling Donald Anderson on April 11, 1954, at Hoff Lutheran Church in Rustad. Following the wedding, they made their home on the Anderson family farm until 1984, and were blessed with four beautiful children, Mark, Arlen, Timothy, and Jane. They moved to Fargo, ND, where they managed an apartment building. Later, they purchased a home in Moorhead, where she provided day care at her home until she turned 80 years old and even then, did not want to give it up at that age

Evonne was a woman of deep faith. After her first date with Erling, she asked him to do devotions with her. She was a constant parishioner of East Marsh River Lutheran Church, Good News Lutheran Church, and Christ the King, while singing in the church choirs for over 70 years. Evonne and Erling were devout members of Gideons International, a group that encourages each other to do the work of the Lord, and most recognized for distributing copies of Scripture free of charge to hotel rooms, hospitals and other medical offices, schools and colleges, military bases, as well as jails and prisons.

Evonne was an avid quilter, jigsaw queen, enjoyed playing piano at home and for groups. She enjoyed attending family reunions, gardening, baking, canning, and visiting with those she loved.

Evonne passed away peacefully into heaven on April 5, 2022, one day before her 98th birthday and six days before her 68th marriage anniversary to Erling. She was under the loving care of Serenity Assisted Living & Memory Care, and Hospice of the Red River Valley.

Evonne was preceded in death by her parents; by her siblings and their spouses, Amy (Ole) Amundson, William “Bud” (Dorothy) Livdahl, and James (Myrtle) Livdahl; and her twin sister, Eva (Jacob) Skarphol.

If desired, Memorials preferred to the Gideons International s or to Serenity Assisted Living Alzheimer’s projects.

To order memorial trees or send flowers to the family in memory of Evonne Anderson, please visit our flower store.