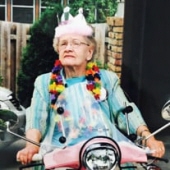 Evelyn was born on July 16, 1917, to Theodore and Anna (Anderson) Hammer, in Hitterdal, MN. She graduated from Hitterdal High School in 1935. She was a beauty operator before moving to Detroit, MI, to be a "Rosie the Riveter," working on various military equipment during World War II. While she was in Detroit, Evelyn married Carl Lokken in 1942.

Carl and Evelyn moved to Moorhead, after the war. In 1947, they welcomed their first son, Thomas Wynn, and second son, James Peter, in 1950. The family enjoyed trips to Itasca State Park and a monumental trip to North Hollywood, CA. Carl passed away on June 25, 1983. Evelyn loved to spend time with her family and friends. She had a spitfire attitude and was a master of witty remarks.

Evelyn was fond of fitness and nutrition throughout her life. At age 98, she was still walking two miles a day. She enjoyed watching women's basketball and playing cards with friends and family. A fun fact about Evelyn is that she had two holes in one while playing golf.

Evelyn was a member of Trinity Lutheran Church, Moorhead, where she volunteered frequently. She had a strong devotion to her faith. She also volunteered at Eventide, where she resided the last several years of her life.

Evelyn was preceded in death by her parents; her husband; and two brothers, Francis Hammer and Thomas Hammer.

The family would like to thank Eventide on Eighth for all the care and attention, as well as Ethos Hospice. Memorials may be directed to either Ethos or Eventide.

Visitation will begin at 1:30 PM, with a memorial service at 2:30 PM, Saturday, February 9, 2019, in Korsmo Funeral Chapel, Moorhead. Burial will be in the spring in Evergreen Memorial Cemetery, Moorhead.

She was one of the rare ones, so effortlessly herself, and the world loved her for it. Atticus

To order memorial trees or send flowers to the family in memory of Evelyn Lokken, please visit our flower store.