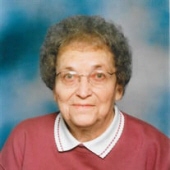 Evelyn Gladys Kading was born March 15, 1926, in Borup, MN, to William and Augusta (Finger) Kading. Both parents had been born in Germany and had immigrated to the United States before marrying, to begin a new life. Evelyn was the youngest of their six children. The family moved to Felton, MN, in Evelyn's freshman year, and she graduated from Felton High School. She was baptized and confirmed at Felton Lutheran Church.

Evelyn was united in marriage to Paul DesJardins in Moorhead, MN, on January 4, 1944. They made their home in Felton throughout their married lives. Paul passed away December 12, 2013. Evelyn moved to assisted living in Dilworth, MN, and then to Eventide on Eighth, Moorhead, MN, in July of 2014. She passed on Tuesday, May 4, 2021, at Eventide on Eighth, at ninety-five years of age.

Evelyn was a hard worker. She worked outside the home in various jobs such as painting and working in the fields. She was the secretary of Felton Elevator for several years. When Paul became a jobber for Standard Oil, she became the bookkeeper for that business as well. Evelyn, whose family called her "Toots" liked visiting with friends and family and enjoyed playing bingo.

She is survived by her daughter, Cheryl (Jim) Kramer, Bemidji, MN; and many nieces and nephews.

She was preceded in death by her parents; husband, Paul; sister, Esther Johnson; and brothers, Reinald, Arthur, Kurt and Carl.

There will be a Life Celebration Service Friday, June 18, 2021, at 2 PM, in the Felton City Cemetery, Felton. Following the service, friends are invited to Gloria Dei Lutheran Church, Felton, for refreshments and to continue sharing memories of Evelyn.

To order memorial trees or send flowers to the family in memory of Evelyn DesJardins, please visit our flower store.