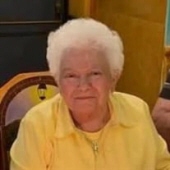 Esther Marlys Haugen was born at her family home on August 28, 1937, in Harwood, ND, to Kristian and Bertha (Johnson) Haugen. She attended elementary school in Harwood and high school at Moorhead State College Campus School. Esther graduated a "Baby Dragon" in 1955.

Esther paid for her room and board at campus school by working at Lincoln Grocery in Moorhead, which her brother Milo owned. While working at Lincoln, Esther met a local boy, Don Tang. They were united in marriage on August 5, 1956, in St. Joseph Catholic Church in Moorhead, recently celebrating 64 years of marriage.

Esther and Don raised their family north of Moorhead and made many memories on the weekends during the Fall and Winter seasons at their "shack" in the woods. Esther instilled in her children and grandchildren the importance of family and living a Christian life.

Esther and Don enjoyed their summers at their lake home on Star Lake near Dent, MN, and up until 2016, they spent their winters in Harlingen, TX.

Esther was a wonderful baker and she also enjoyed snowmobiling, fishing and attending Bible study. Anyone close to Esther can tell you how important popcorn was. No one made popcorn like Esther!

Visiting with friends over a cup of coffee and lemon pie was an important routine for Esther and it was often followed by a ½ stick of Trident gum. She loved going shopping, and simply being on the "go." If the car was moving, Mom liked to be in it.

Most importantly, Esther was a devoted wife, loving mother, grandmother, and great-grandmother and will be deeply missed by her entire family.

She was welcomed to her eternal home by her parents and siblings.

Visitation for Esther will be held Sunday, September 27, 2020, from 2 - 4 PM, with a time of sharing at 4 PM, in Korsmo Funeral Chapel in Moorhead. Celebration of Esther's Life will be Monday, September 28, 2020, at 2 PM in Grace Covenant Church, Fargo. Esther will be laid to rest at Oakwood Cemetery in Harwood.

In accordance with CDC and local guidelines, social distancing and masks will be required in attendance.

The time of sharing recording can be viewed at:
https://portal.midweststreams.com/services/displayvideo/13037

The livestream for Esther's service can be viewed at: https://www.youtube.com/channel/UC0TTeeDGLo36Zb7UD4_OfuA?view_as=subscriber

To order memorial trees or send flowers to the family in memory of Esther M. Tang, please visit our flower store.