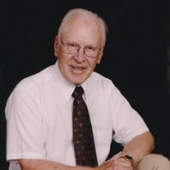 Erling, a Norwegian name that means "Little King," was born on August 27, 1923, to Dr. Herman and Inga (Hippe) Linde, in Cyrus, MN. Immediately after graduating from Cyrus High School in 1941, he joined the Navy Band and spent the next six years stationed in Brazil and Washington, DC. After his service, he began his studies at Concordia College in Moorhead, MN, initially following in the footsteps of his father in medicine and earning the title "Doc Linde." But after a year of studying the sciences, he decided to follow his passion in music, earning his Bachelor's degree in Music Education.

Erling was an accomplished flutist. When asked why he played the flute, he liked to tell the story that he had asked for a bicycle for his birthday and received a flute instead! After graduating from Concordia in 1951, he continued his flute studies and earned his Master's in Flute Performance in 1952 from the Cincinnati Conservatory of Music. He was hired to direct the band program in Starbuck, MN, the following year. While shopping for music at Daveau's Music Store in downtown Fargo, he was assisted in his selections by a lovely young employee named Janice Nelson, who was an accomplished pianist in her own right. They were married August 9, 1953 and remained devoted to each other until her death 59 years later.

Erling was the Director of Bands in Cando, ND, from 1953-1955. He next accepted a band position in Moorhead, which he held until he retired in 1985. For decades, he was the band director at North Junior High School and Park, Sharp, Washington, Sabin and Georgetown Elementary Schools, starting hundreds of students on their band instruments, many of whom continue to play today. He was a huge supporter of the arts, attending and sponsoring hundreds of concerts and recitals in the area in his retirement.

Erling also held the position of Principal Flute of the Fargo-Moorhead Symphony Orchestra for 32 years. During his tenure, he played under the baton of Sigvald Thompson and J. Robert Hanson. For several years he was joined in the woodwind section with high school bassoonist Peter Schickele, also known as PDQ Bach. Erling was also Adjunct Flute Instructor at Concordia College, teaching there from 1957 into the 1970s. After his retirement from the symphony, Erling gave his time to the Moorhead Kiwanis Club, The Lutheran Church of Christ the King, Moorhead Retired Teachers and Hospice of the Red River Valley. He was a resident at Linden Tree Circle at Eventide on 8th in Moorhead, serving as their choir director and enjoying the many friends he had there. The family extends special thanks to the wonderful and compassionate caretakers he experienced at Eventide.

He was preceded in death by his parents, wife, Janice Linde; and sister, Hilma Griswold.

Memorials may be given to the FM Symphony, FM Area Youth Symphony, Eventide, The Lutheran Church of Christ the King and Concordia College, Department of Music.

To order memorial trees or send flowers to the family in memory of Erling Linde, please visit our flower store.