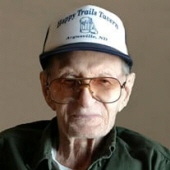 Elmer Charles Drellack, 92, of Moorhead, MN, passed away peacefully Saturday morning, March 2, 2019, at Sheyenne Crossing Transitional Care in West Fargo, ND. His smile and his generous spirit warmed the hearts of all who knew him.

Elmer was born in rural Alvarado, MN, on September 6, 1926, the son of Charles and Esther (Vary) Drellack. His early years were spent growing up on a farm in northern Minnesota and he attended Marshall County School. In 1941, the family moved to a farm north of Crookston, MN, where he continued his education.

In 1948, he enlisted in the U.S. Army and served his country until 1949. He was called back to serve in the Korean conflict from 1950 until 1951. He spent the next years working as a truck driver and in the construction field.

On March 4, 1968, he married Florence (Dahl), combining their individual families as one. They shared the next 49 years together raising their children, enjoying adventures, and making memories. Camping, snowmobiling, fishing, playing cards, and dancing to their favorite waltzes were just a few.

In 1978, they moved to Moorhead where Elmer began his career with the City of Moorhead Street Department. He was a diligent, reliable worker, enjoyed by everyone, and usually had a joke in his pocket to share. He retired in July of 1992, which allowed him to explore his hobbies as well as time with family. Elmer was full of life and enjoyed the outdoors. Many summer weekends were spent fishing and camping with family and friends. Hunting was a favorite in the fall, winter ice & spear fishing, and a count-down to the spring opener. He was always tinkering with something, and that resourcefulness combined with his tenacity had him fixing or building most anything. He volunteered his skills at Moorhead Manor for many years, fixing what needed to be fixed, delivering baked goods, and enjoying the companionship of the residents as well as the employees.

Elmer regularly shared his impressive musical talents on an assortment of instruments, the guitar and harmonica being his favorites. He carried his harmonica with him nearly everywhere, playing at family events, or even while sitting in the waiting room at an appointment.

After Florence's passing in 2017, Elmer returned to Moorhead Manor as a resident, where he was provided with outstanding care, love, and support. He continued to enjoy time with family and friends, always looking forward to the next fish fry. Elmer's family will be forever grateful for his 92 years of wisdom, talent, guidance, and love.

A Visitation for Elmer will be Friday from 5:00 PM until 7:00 PM, with a 6:30 PM Prayer Service in Korsmo Funeral Chapel, Moorhead.

His Memorial Service will be Saturday, March 9, 2019, at 11 AM in Our Savior's Lutheran Church, Moorhead.

To order memorial trees or send flowers to the family in memory of Elmer C. Drellack, please visit our flower store.