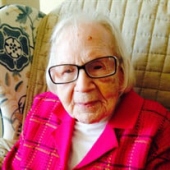 Elizabeth was born on November 18, 1917, to Martin and Mathilda Lee at Dickinson, ND. As a young woman, Elizabeth moved to New York, NY, where she worked in the maid service area for a hotel. At the request of her mother, Mathilda, she returned to the family farm where she was a homemaker and cared for her mother until her death.

Elizabeth never married and remained on the farm caring for her brothers, Martin and Leonard. She was proud of her large garden and farm animals. Many vegetables were harvested and stored in the root cellar to last through the winter and there were fresh eggs daily from the chickens. When her last brother, Martin, died in 1995, she moved to Moorhead, MN, and lived with her older sister, Stella Lee Carlson, at 1028 3rd Avenue South for 13 years.

Elizabeth moved into Adult Foster Care with Nancy Messerschmidt in 2009. Together, they would travel all over town and on many road trips to sightsee while Elizabeth would sing songs and talk. Her favorite was "Jesus Loves Me" which she sang frequently. In 2013, Elizbeth moved to Nancy's mother's, Gloria (Don) Fornes, Home Sweet Home Elder Care at Horace, ND. While living there Elizabeth was more for singing songs, playing games, working with finger tasks, and maintaining walking. When Gloria and Don retired in 2017, Apanda Marial, who worked for Gloria and Don, became her caregiver at Rejoice 4 Living Adult Foster Care, Moorhead which Apanda owned.

She is survived by many nieces and nephews.

A Celebration of Elizabeth's Life will be Monday, June 10, 2019, at 11 am, in Bethesda Lutheran Church, 401 40th Ave S., Moorhead. Interment will be in Evergreen Memorial Cemetery, Moorhead.

To order memorial trees or send flowers to the family in memory of Elizabeth Lee, please visit our flower store.