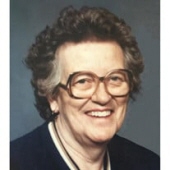 Eleanor Jeanne Lovold was born March 29, 1925, the daughter of Ted and Ethel (Tietema) Lovold, in Sioux Falls, SD. She was raised in Slayton, MN, and graduated from Slayton High School. Eleanor then attended the Eitel School of Nursing in Minneapolis, MN, where she received her nursing degree.

On March 8, 1947, she was united in marriage to Howard Payton in Sioux Falls. They lived in Slayton where Eleanor worked in the Pipestone (MN) Hospital, and in 1958, moved to Long Prairie, MN, and she worked in the Sauk Center (MN) Hospital. Eleanor and Howard settled in Moorhead in 1966, where Eleanor worked in St. Ansgar Hospital until retiring in 1989. They continued to live in Moorhead and Howard died on January 22, 2013. Eleanor later moved to River Pointe in Moorhead before becoming a resident of Eventide on Eighth.

She was a member of Grace United Methodist Church. Eleanor was known for her knitting and crocheting. Her favorite expression was, "Every day is a gift."

She was preceded in death by her parents; husband, Howard; and brother, Jack.

Memorials may be directed to Grace United Methodist Church.

A Gathering of Friends for Eleanor will be one hour prior to service.

Her Memorial Service will be Wednesday, November 7, 2018, at 2:00 PM in Grace United Methodist Church, Moorhead.

Burial will be in Moorhead Memorial Gardens, Moorhead.

To order memorial trees or send flowers to the family in memory of Eleanor J. Payton, please visit our flower store.