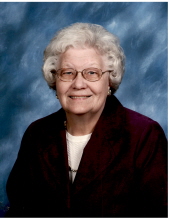 Eileen Arlys Haiby was born at 7:30 am on February 19, 1936, at Boysen Hospital, in Pelican Rapids, MN, to Arthur and Ella (Huseby) Haiby. For the first 7 years of her life, the family lived in Norwegian Grove Township, 6 miles west of Pelican Rapids, on the Bernard and Amine Huseby farm, Eileen’s maternal grandparents' original home. During October of 1943, the family moved on to the Otto and Emma Johnson farm southeast of Pelican Rapids in Erhard’s Grove Township. Growing up, on what is still the family farm, she soon joined her dad in learning to drive a stick shift, working on all kinds of farm machinery, and helping with the daily chores. In August of 1946, she came down with a serious case of Whooping Cough, which held her out of school for an entire year. When she recovered, she attended Country School District 35, and helped teach other students in this one room schoolhouse, before moving on to high school in town. During her high school days, she was active in picking potatoes, working as a waitress, cleaning lake cabins, and taking care of her little brother, Duane.

Eileen graduated from Pelican Rapids High School in 1955 and attended Dakota Business College in Fargo for 2 years. On July 19, 1957, Eileen was united in marriage to Milo Anderson at Trinity Lutheran Church in Pelican Rapids. They welcomed a son, Michael on July 30, 1958. She was employed as a bookkeeper for W.W. Wallwork, Inc. in Fargo for 2 years, and for over 40 years, Eileen worked for Midland Hospital Supply in customer service. She was known for her superb background knowledge and service to area hospitals on medical equipment, her efficiency was essential to hospitals during emergencies. She was the foundation of the company and was affectionately called “mother Midland'' by many.

Eileen was a hard worker her entire life. She was an active member of The Lutheran Church of Christ the King, where she served on the church council, was the funeral coordinator, and became active with the quilters, and Janitors for Jesus. Eileen enjoyed spending time at the lake with her family on Lake Lida, tending to her flowers and garden each season, keeping her yard immaculate. She was known for her Norwegian sweet soup that she would make for the holiday season. Each summer in July, the family would take off for 2 weeks and get in the 1961 Oldsmobile and travel the United States to some uncharted destination. This provided us with many fond memories. Going out for Sunday lunches, after church, and attending Saturday morning auctions were events she always looked forward to as she got older.

Her life centered around her son Michael. She was an encourager and strongly believed in education, always making sure her son received the education he needed to succeed. Oftentimes, you would see Eileen helping to serve at athletic events, especially during track meets where Michael was coaching. Eileen was always a strong supporter of athletics for her son as a player, coach, and fan. Within the family she is remembered as one that worked with gift delivery for Holiday Clearing House, and for being generous with food, gifts, and clothing to anyone that was in need. She will be greatly missed.

Eileen is survived by her son, Michael Anderson of Dilworth; one sister, Ardelle (Ernest) Kolle of Moorhead; one brother, Duane (Carol) Haiby of Pelican Rapids, MN; and several nieces and nephews.
She was preceded in death by her parents, Arthur and Ella Haiby; her husband, Milo (1999); one sister, Adella; and one brother, Ardean.

Memorials in Eileen’s name may be given to the Lutheran Church of Christ the King (Moorhead) and to Northwest Cemetery (Pelican Rapids).

To order memorial trees or send flowers to the family in memory of Eileen A. Anderson, please visit our flower store.