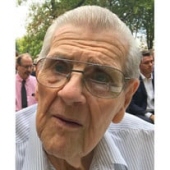 Edward A. Sellent, 96, of Moorhead, MN, died Sunday, May 24, 2020, at Essentia Hospital in Fargo, ND
Edward Arthur Sellent was born May 11, 1924 in Addison, ND, to Eduard and Amanda (Liebenow) Sellent. He grew up in Everest, ND, graduated from Casselton High School in 1941, and earned his Bachelor of Science degree from North Dakota Agricultural College in 1951.
As a young man, Ed served in the Army as a radio repair man and was stationed at Ft. Leonardwood, MO. While older than the average student, Ed then went on to earn his degree in Mathematics & Science. Ed's first teaching job was in Hallock, MN, where he met fellow teacher and future wife, Barbara Fankhanel. Ed and Barb were married on June 12, 1953, at Trinity Lutheran Church in Sabin, MN. Ed built their family home in Sabin by himself, often referring to construction manuals to learn how. He and Barb would live in that same house, where they raised their five children, until they moved to Moorhead in 2011. Ed served on the Sabin City Council for 16 years.
A teacher in Moorhead for almost 30 years, Ed taught Ninth Grade Algebra to thousands of students. It seemed he couldn't go anywhere without running into a student. He retired from teaching in 1981.
Much to Barb's dismay, they purchased a farm in 1965, the same year their youngest child was born. Ed had always wanted to get back to farming. It wasn't a money maker, however there was always fresh produce to eat, tons (literally tons) of pumpkins to sell to the local grocery store in the fall and a place where all were welcome to come and sit on the front porch. Everyone was surprised when they sold the farm when Ed retired. He decided it was time to pursue his other passion of going to auction sales and buying and selling antique tools. He loved getting a bargain and turning it into a profit, although visiting with his auction sale friends was just as good. Ed loved to visit and share stories.
Ed was preceded in death by his loving wife, Barb; and two sons, Edward and Jim. He is survived by three of his children, Barb Moses, San Diego, CA, Carl (Barb) Sellent, San Diego, and Steve (Nadine Hillesheim) Sellent, Moorhead; daughter-in-law, Carol (Dennis Bollinger) Sellent, West Fargo, ND; five grandchildren, Amanda (Nick) Dablow, Kristin Sellent, William Sellent, Jordan (Brittney Just) Klovstad, and Joni (Tyler) Hjalmquist.
A private family service will be held on Tuesday, May 26, 2020, with private burial to follow at Trinity Lutheran Cemetery, Sabin. A video of the service will be available later at www.korsmofuneralservice.com
The family requests any memorials be sent to Ed's favorite charity, Great Plains Food Bank, or a local food pantry.

To order memorial trees or send flowers to the family in memory of Edward A. Sellent, please visit our flower store.