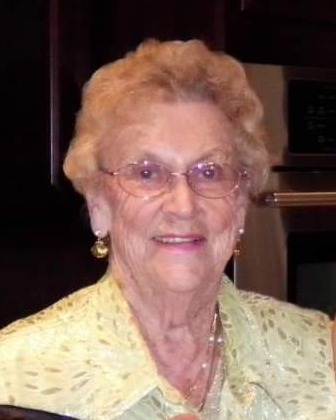 On November 1, 2022, Edna J Kalsow passed away at the age of 97, under the care of Home Appeal Assisted Living in Moorhead, MN, and Hospice of the Red River Valley.

Edna was born July 17, 1925, in McLeod, ND, to Emil and Ida (Almlie) Ankerfelt. The family moved to Leonard, ND, when she was three years of age, to take care of Grandmother Almlie. She completed high school in Leonard and participated in cheerleading and sports, graduating as the class valedictorian.

She attended North Dakota Business College and married Ralph Kalsow in 1948, after he returned from his tour of duty in the Army during World War II. They made their home in Moorhead, MN, and were lifelong members of Our Redeemer Lutheran Church.

She loved spending time at the family lake cabin on Big Cormorant during the summer and at Valley Palms, Apache Junction, AZ, in the winter making lifelong friends along the way. Having family, grandkids and great-grandkids visit was a true joy to her.

The family would like to thank Eventide Linden, the Kramer family of Home Appeal Assisted Living and Hospice of the Red River Valley for their excellent care in Edna's final months.

Donations can be made Hospice of the Red River Valley or Our Redeemer Lutheran Church.

A celebration of life is planned for early June 2023 at Our Redeemer Lutheran Church in Moorhead.

To order memorial trees or send flowers to the family in memory of Edna Kalsow, please visit our flower store.