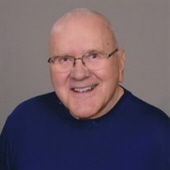 Earl, the son of Orvin and Edna (Pederson) Lee, was born on the family farm in Nome, ND, on August 23, 1927. The family moved to Moorhead, where Earl received his education. At the age of 17, he entered the US Navy, and faithfully served in the Pacific Theatre of war, where he conquered his fears and survived typhoons and seasickness.

After his discharge from the Navy in 1946, Earl returned to Moorhead, where he attended and graduated from Concordia College. While at Concordia, he met his true love, Jean Knecht. They were married on Dec. 30, 1949, in Bismarck, ND. They made their home in Moorhead.

Earl was a strong cheerleader for his hometown, where he was active in numerous organizations such as the "Y's Men" and his church, Lutheran Church of the Good Shepherd. He was a salesman his entire life, with real estate sales being his favorite, because he enjoyed helping families find the perfect home. Earl had a passion for playing racquetball. He spent many noon hours on the "challenge court" of the YMCA, enjoying the camaraderie and competition.

Visitation for Earl will be Monday, Jan. 20, 2020, from 5 PM to 7 PM, with a prayer service at 7 PM, in Korsmo Funeral Chapel, Moorhead. His funeral will be Tuesday, at 11 AM, in Lutheran Church of the Good Shepherd, Moorhead.

Earl, loving father, grandfather, great-grandfather, loyal friend to many, proud veteran of WW II, and humble servant and faithful son to God, has left his earthly shell to be joined to his dearly departed wife.

To order memorial trees or send flowers to the family in memory of Earl M. Lee, please visit our flower store.