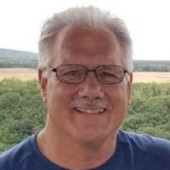 To join Duane's family for his Funeral Service please click on the following link: https://portal.midweststreams.com/services/watch/zEgR8O77zq

Duane was born on July 28, 1957, in Fergus Falls, MN. He was the second of five children of Herbert and Phyllis (Lankow) Hiedeman. Duane spent his childhood years on the family farm near Doran/Campbell, MN. He graduated from Campbell/Tintah High School in 1975 and continued his education at NDSCS in Wahpeton, ND, where he earned a degree in diesel mechanics.

In 1978, he was united in marriage to Lori Steinwand in Breckenridge, MN. He enjoyed farming with his father near Doran, and later went to work as a diesel mechanic for Lillegard, Inc. in Wahpeton. He eventually worked for Steinwand Oil Company and Conzemius Oil Company, both in Breckenridge.

In 1992, Duane went back to school and received an electronics degree from NDSCS. Two years later, he and his family moved to West Fargo, ND, where he took a job with Williams Pipeline - later known as Magellan Pipeline.

In 2020, Duane retired from Magellan Pipeline eager to travel in his fifth wheel camper and spend endless hours in the great outdoors.

Duane was very strong in his faith in Christ and was very active in the church. He especially enjoyed singing in the choir and the fellowship of a good Bible study. He embraced every opportunity to take his family camping, watch the Minnesota Vikings or tinker in the garage. Most recently, he could be found testing the boundaries of the latest technology or bonding with his beloved grandchildren. For those who knew him well, his true passion in life was helping others and lighting up the room with his quirky humor, his boisterous laugh and his relentless optimism. He was dearly loved and will be greatly missed.

Duane is preceded in death by his father, Herbert Hiedeman.

To order memorial trees or send flowers to the family in memory of Duane P. Hiedeman, please visit our flower store.