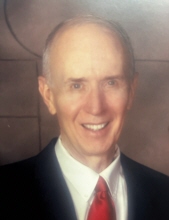 Dr. John Jeffrey Keating, age 83, of Fargo, ND, passed away peacefully at the Touchmark care facility on October 12, 2022. In his final years, he battled Parkinson's. Just like other challenges in his life he faced this one with strength, grace, and gratitude. He was a kind patient who grew to draw the admiration of the caring Touchmark and Hospice of the Red River Valley staff due to his gracious manners. Many of the nurses called him "Dr. John or Dr. Keating", as he often considered their care for him as office visits.

John Jeffrey Keating was born in Minneapolis, MN, to parents William and Marjorie Keating. He was born into a family of love as his parents and 2 older sisters, Diane and Carol, welcomed their baby brother into the world. The Keating family's world was shaken in the Fall of 1944 when their loving father, William, passed away at the young age of 36. This event shaped John's childhood and developed a determined work ethic taking on an early role as the "man of the house." His grandmother, Mable, lived with them and kept the home fires burning so John's mother could work at War Production Board.

John graduated from St Louis Park High School as valedictorian. Upon graduation from HS, John enrolled and attended the University of Minnesota, where he earned a B.S. in chemistry and math. Post-graduation he worked as a computer programmer at General Mills, taught high school AP chemistry in Racine, WI, and served two years in Army Intelligence in Fort Meade, Maryland. However, he realized he was called to medicine by several former professors who felt his educational strengths lay in medicine and went on to attend the University of Minnesota Medical School. He always viewed the University of Minnesota in the highest regard, feeling he received a world-class education. He would go on to support the Golden Gophers in all areas, but he especially loved watching and cheering on the University’s sports teams.

In the Fall of 1974, he would marry the love of his life, Nancy Thingelstad whom he fell in love with while working evening shifts at Lutheran Deaconess Hospital. After graduating from medical school he took on residency programs in Radiation Oncology and Nuclear Medicine. Their first and second children were born right at the time of taking boards. He spent his residency years working at the Minneapolis VA hospital and St. Paul Ramsey.

In the Fall of 1978, with their third child due in December, John and Nancy moved their young and growing family to Fargo, ND. Dr. Keating became the first board-certified radiologist oncologist in North Dakota when he accepted a job at St. Luke's Hospital in North Fargo in l978. He would spend his early years working days that went long into the night treating patients, being a leader in the introduction of Brachytherapy, offering pediatric cancer care, and providing service to many patients in an understaffed oncology department.

John and Nancy raised their five children in the Woodcrest neighborhood of North Fargo, acquiring many friends over the years and being involved in the community. John encouraged his children's activities in the classroom, sporting arena, and personal lives and in a humble way was proud of any successes that were fortunate to come their way.

John decided to start his own private practice in Radiation Oncology in 1983 and would eventually move to the Roger Maris Cancer Center unit of MeritCare Hospital. John loved caring for cancer patients by helping them find pain relief and/or healing of cancer. His practice thrived on having a loyal staff of dedicated colleagues, technicians, physicists, and secretarial personnel. They were the best. He was in independent practice until 2001 and then continued to practice locally for Sanford and Essentia as well as at Altru in Grand Forks, ND, and in Minneapolis until 2014 when he officially retired but even then he often volunteered services to family and friends who found themselves alone on a difficult cancer journey.

John was a loving father, and devoted husband and placed a strong emphasis on faith and family. He was noted as the ultimate vacation planner, arranging many family reunions of extended family and gatherings once a year in Minnesota Lake Country or a travel destination. Some of the Keating family's most treasured memories are from these trips. He and Nancy celebrated their 40th wedding anniversary--putting emphasis on thankfulness to God, reviewing both sides of family history, and thankfulness for grandchildren of whom they were blessed in abundance. In 2010, John and Nancy went to Norway on a trip organized by the Carol Juven Tours that meant very much to both of them as Nancy's ancestors derived from Norway, and John's are from the Norman Vikings.

All floral arrangements are to be delivered to the Sanctuary Events Center.

To order memorial trees or send flowers to the family in memory of Dr. John J. Keating, please visit our flower store.