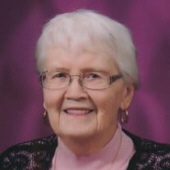 Dorothy Marie Riddle passed away Wednesday, April 1, 2020, from the vicissitudes of old age. She was 96.
Dorothy was the first child born to Eddie and Ebba Larson of Verona, ND, on July 27, 1923. The home farm was south of Verona, across the road from the Riddle family which she married into, after graduating from Verona High and Ellendale Normal college.
She married Ernest Riddle in October of 1943. They started farming near Elliot, ND, with a team of horses and a Massey-Harris tractor, on a farm that had no electricity but did have a flowing artesian well. Dorothy taught grades 1-8 in a 1-room school a mile and a quarter from their farm, until their first child was born in 1945. Four more children followed, nicely spaced over 14 years.
They quit the farm and moved to Wheaton, MN, in 1953. Dorothy remained the ever-frugal housewife and homemaker until the kids were all in school. She then started her second career working at Wheaton Community Hospital in administration. In 1967, the family moved to Moorhead, MN. She took an administrative position with Lincoln Mutual Insurance in Fargo, ND, which was subsequently purchased by Blue Cross/Blue Shield of ND. She retired from BC/BS in 1992.
Throughout her life, Dorothy was a devout and active Lutheran. Her last church home was The Lutheran Church of Christ the King (ELCA) in Moorhead, and when it was time to go into assisted living, she didn't consider anything except Eventide Linden Tree because she 'knew the people there."
She was preceded in death by her husband Ernie; daughter-in-law, Ginny; and grandson Travis; but outlived almost everybody of her generation, including two sisters, Eleanor and Genevieve; two brothers, Leonard and Lawrence; and all of their spouses except Genevieve's husband, Ken Brandt of Golden Valley. MN.
She is also survived by in-laws, Grace and Dean Kieininburger; her five children, Vern (Jennifer) in Lanesboro, MN, Carol Rutten (Ron) in Alexandria, MN, Al (Maureen) in Fargo, Jerry (Randi) in Pelican Rapids, MN, and Lori (Dave) Goble in Eden Prairie, MN. Her legacy is enhanced by 11 grandchildren, 27 great-grandchildren and 1 great-great-grandchild.
Private funeral services will be held. Interment will be in Riverside Cemetery, Moorhead.
Written with love by the family of Dorothy Marie Riddle.
Arrangements by Korsmo Funeral Service

To order memorial trees or send flowers to the family in memory of Dorothy M. Riddle, please visit our flower store.