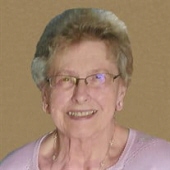 Dorothy Louise Walters was born June 21, 1933, the daughter of Henry and Dorothy (Heunisch) Walters, in St. Paul, MN. She was raised in St. Paul and graduated from Harding High School. Dorothy then attended Lakeland College in Sheboygan, WI, where she met her future husband, Jim Koch.

On August 30, 1951, Dorothy and Jim were united in marriage in St. Paul. They then moved to Judson, ND, Kansas City, KS, Ellinwood, KS, and later Fergus Falls, where Jim served as a pastor in those communities. Upon retiring, they made their home on Lake Lida, near Pelican Rapids, MN, before moving to Moorhead.

Dorothy loved music and playing the organ and piano. She also taught piano lessons for many years.

She was preceded in death by her parents; brother, Richard; and step-sister, Betty Eschbach.

Memorials given to the family will be directed to the Eventide Foundation, designated to the Music Therapy Program and First Congregational United Church of Christ, Fargo, ND.

Dorothy's Memorial Service will be Tuesday, September 24, 2019, at 2:30 PM in Bottolfson Chapel at Eventide on Eighth, Moorhead.

To order memorial trees or send flowers to the family in memory of Dorothy Koch, please visit our flower store.