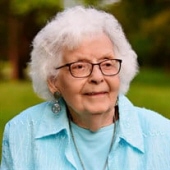 To view the recorded Mass of Christian Burial for Dorothy, please follow this link:
https://portal.midweststreams.com/services/watch/Ju2C68esB4

Dorothy married Charles M. Flynn on July 23, 1946, at St. Mathias' Church in Windsor. Dorothy was a loving mother to her nine children. The young family moved from Gackle, ND, to Dilworth, MN, then Moorhead, MN, followed by Oriska, ND, and finally back to Moorhead where they settled in for the long run. Dorothy was a member of St. Joseph Catholic Church in Moorhead for over 65 years and was an active member of the Christian Mothers and Catholic Daughters.

Dorothy started waitressing as the children grew. It gave her an opportunity to put her people skills to work. She started at the Gardner Hotel and then moved to the Oak Manor, Holiday Inn, and eventually the West Fargo VFW. For a year, Dorothy operated the luncheon counter at the Cass County Courthouse, Fargo.

A neighbor told her she should apply for a custodian job at Moorhead State University. This led to Dorothy working 23 years as a custodian at Moorhead State. She retired at age 77, but her retirement was short-lived. A couple of months later she took a job at Golden Living Nursing Home in the kitchen doing food preparation. Dorothy worked there until she was 87.

Dorothy showed her love by baking and cooking for you. Neighbors bought her lemon meringue pies. It was just one of her many specialties she would whip up in her spare time. Caramel and cinnamon rolls, angel food cake and her chocolate Texas sheet cake were regular offerings at family gatherings. Roast beef dinners with all the fixings were a regular Sunday offering for whoever was in town. In Dorothy's home there was always room for more people to join in the family dinner.

There will be a visitation Sunday, June 13, from 6 - 8 PM, with a prayer service at 8 PM, in Korsmo Funeral Chapel, Moorhead.

Interment will be in St. Joseph's Catholic Cemetery, Moorhead.


To order memorial trees or send flowers to the family in memory of Dorothy Flynn, please visit our flower store.