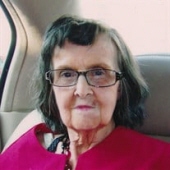 Dorothy Frances Demo was born on April 29, 1927, in Benson, MN,. to Alice Nina (née Buroker) and James Bernard Demo. She spent her early years on the Swift County farm of her parents and grandparents, where she and her twin brother, DeWayne, were the oldest of ten children. In the early 1940's, she moved to St. Paul, MN, with her family and attended Mechanic Arts High School, graduating in 1945. After graduation, Dorothy worked as a hostess for Rene Boursier's Restaurant in downtown St. Paul. She attended Minnesota School of Business, later working as a secretary at Johnson High School in St. Paul and George T. Walker Company in Minneapolis, MN.

On November 17, 1956, she married Glenn Thedin at Plymouth Congregational Church in St. Paul. In 1958, Dorothy and Glenn relocated to Morris, MN, with their daughter, Tammy. Their sons, David and Mark, were born in Morris. Dorothy worked as a secretary for the family business, later earning her real estate license. Dorothy was a 60-year member of the VFW Ladies Auxiliary Post 5039.

Dorothy, affectionately known as â€˜Dot', loved music, dancing, and dining. She was an avid reader of newspapers, magazines, and books, both fiction and non-fiction. She enjoyed trips and family get-togethers, especially for picnics, parades, and fairs.

Dorothy Frances (Demo) Thedin passed away on Sunday, August 18, 2019, at Arbor Park Assisted Living Center in Moorhead, MN. She will be missed for her sharp wit, kind heart, and indomitable spirit.

A special thanks to Dorothy's caregivers, especially Dominic, Janice, Carissa, and JoAnne.

A Visitation for Dorothy will be one hour prior to her funeral service.

Burial will be in Summit Cemetery in Morris.

To order memorial trees or send flowers to the family in memory of Dorothy F. Thedin, please visit our flower store.