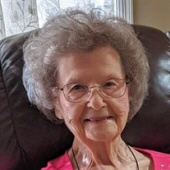 Dorothy Ann Miller, 94, Maplewood, MN, formerly of Moorhead, MN, went home to be with the Lord on Thursday, October 8, 2020, with family present.

Dorothy Ann Miller, daughter of Ferdinand and Anna (Gruhl) Meier, was born in South St. Paul, MN, on May 1, 1926. She grew up on a farm near Hawley, MN.

On June 29, 1952, Dorothy married Lester Miller, at Hawley, MN. They made their home on the farm near Baker, MN. In 1960, they moved to Moorhead where Dorothy did daycare, taught accordion lessons, and worked several years at Concordia food service.

Dorothy loved her family more than anything and loved cooking and baking for them. Countless angel food cakes were made for everyone's birthday. She also enjoyed crocheting and puzzles in her later years. In 2007, the couple moved to the Twin Cities, and have lived with their daughter, Linda, in Maplewood for the past 5 years.

A Private Graveside Service will be held in Hawley Cemetery, Hawley, MN.

To order memorial trees or send flowers to the family in memory of Dorothy A. Miller, please visit our flower store.