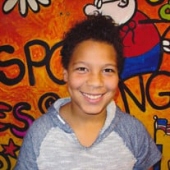 Dontrell "DT" James Momoh was born in Jamestown, ND, on September 15, 2007, to Christopher "Chris" Nurdeen Gbolan Momoh and Amy Jo Ronan. Chris, Amy, and little baby Dontrell moved to Fargo, very soon after, where they lived until 2010; where Dontrell made his first giggles and took his first steps. The family then moved to St. Paul, MN, to be with "Nana and Papa" - Jessie and Joann Blaylock, Chris's mom and stepdad. They stayed in the cities for 2 years, during which time Chris gave his son his first best friend - Mojo Momoh, a tuxedo-colored pitbull mix with high energy and a big love for little DT. It was there where many deep connections and lasting memories were made.

In 2013, Fargo called them back to North Dakota, where the family presently resides. DT was the most dashing gentleman this side of the Mississippi River when his parents tied the knot in October, 2014; he was the light of Amy and Chris's lives. A surprise awaited the family, though. If you thought Dontrell couldn't be any cuter...the day he became a big brother to miss Marlee Marie. That boy lit up like nobody had ever seen! If he was created for anything, it was clear to all that it was to be the best big brother the world had ever known. Dontrell loved Marlee more than anything. Family made up their world, and DT was at the center of their love.

When Dontrell began honing his interests, he followed in his daddy's footsteps - basketball, football, and gaming. The amount of stats this kid could list off for teams or players would blow your mind! DT had the competitive spirit in him; he was always 'bout to go Beast Mode!' on something. Music was big, too.

Need some catchy riffs like "Old Town Road" or some smooth moves? DT knew. Wanna gain some mad skills on Fortnite? DT had game for days. And when he'd shoot you that sly smile with those dimples? Girrrl - you done! He was a class act MVP with charm and style. When he wasn't gaming or watching sports, Dontrell loved to do art - painting/sculpting/drawing/coloring; he was always so proud and excited to show off his newest masterpiece. His creativity was never-ending. Reading was another love of his; you'd always catch him scanning through the newest DogMan, CatMan, and Captain Underpants, or even brushing up on some Kobe Bryant highlights.

Let's not forget to mention the reason Dontrell earned the best nickname, "Meat" - This Kid Loved FOOD! Not just any food, though; forget the candy and sweets, this guy knew what's good. Save the cake, just give DT some greens, vegetables, African food, fried chicken; SOUL food. Dontrell had soul, and a more loving soul would be hard to find. He was ever-giving, quick to learn and to forgive, always cared about doing his best, and he had more love for others in his short time here than many learn in their whole lives. In school, he always made friends quickly. When he struggled with math, he would work even harder at it, until he conquered and even excelled in it. Dontrell wanted to make his daddy proud more than anything. The bond he formed with so many; the lives he touched - from Uncle Bam, to his cousins and his classmates; DT was so very loved. He was truly special and will be sorely missed; a hole in our hearts for #24 will remain forever.

Dontrell was preceded in death by his aunt, Felicia Nicole Jefferson; and his great-grandparents, Stanley Swenson and Robert and W. Lue Jefferson.

Dontrell's funeral service will be at 3 PM, Wednesday, June 12, 2019, in Bethel Evangelical Free Church, Fargo, with a visitation one hour prior.

To order memorial trees or send flowers to the family in memory of Dontrell James Momoh, please visit our flower store.