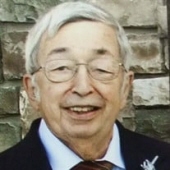 Donald was born May 3, 1938, in Marquette to Donald and Rose (Bertrand) Carriere and graduated from Bishop Baraga High School in 1956.

Donald worked as a baker for forty-five years. The majority of this time he worked for Joe Lueken at Lueken's food store in Bemidji, and he continually praised Joe as the best boss anyone could have.
Don married Winifred Anne Mancina (deceased) in 1968. Don and Win had two children, Patrick and Mary.

Don loved spending time with his family. He had 4 grandchildren: Samuel (Kaiser) and Jude, Shiloh and River (Barsch). He was extremely proud of his children and grandchildren and had great joy in talking about them. Don was a enjoyed baseball and was an avid Detroit Tigers fan. He also loved opera, and Mario Lanza was his favorite singer. He had an encyclopedic knowledge of classic movies and actors and loved to talk about them. He was a devout member of St. Phillips parish and participated in rosary and adoration, also serving as an usher for years. While he was still able to drive, he enjoyed helping people get to mass. He suffered strokes in his final years that took him away from Bemidji, his adopted hometown. But it was his third bout with cancer that led to his passing.

Don was preceded in death by his parents; wife; sisters, Mary Anne Zyskowski and Elaine Kuhn; and a brother, Paul Carriere. He was followed by his last sibling, Jude Carriere, who passed eight days after him.

The Carriere family will greet relatives and friends at St. Phillips Catholic Church on Saturday, October 5, 2019, beginning at 9:30 a.m. until the time of the Mass of Christian Burial at 10:00 a.m. in the church. A funeral luncheon will be served in the parish hall immediately following the Mass at St. Phillips. All are invited to share memories of Don. Burial will take place in the Holy Cross Cemetery at 12:30 that day. In lieu of flowers please consider donating to St, Phillips Catholic School in Don's memory.

To order memorial trees or send flowers to the family in memory of Donald G. Carriere, please visit our flower store.