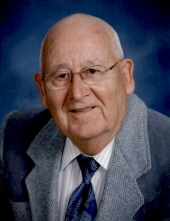 Don was born on October 11, 1932, to Ingvold and Nellie Wickoren, in their home in McLeod, ND. He was baptized and confirmed at Bethany Lutheran Church in McLeod. As a young man he enjoyed riding horses with his friends. They spent hours riding in the Sandhills near McLeod. He worked for his uncle on the farm for several years before serving two years with the National Guard in Alabama among other places.

After his time in the military, he moved to St. Paul, MN, where he worked for G. Heileman Brewing Company in the shipping department for 33 years. In 1964, he met Louise Flint; on September 12th of that year, they were married. In his spare time, he tended his gardens of hybrid tea roses. He loved to travel and during vacations he and Louise visited friends and family in many states. Don was also an avid collector of Avon products, Rosemeade Pottery from Wahpeton, ND, and Fostoria collectible glass. He made a model train layout, featuring his hometown of McLeod, that is now in the McLeod Depot Museum.

After Louise retired in 1995, she and Don moved to a townhouse on the Meadows Golf Course in Moorhead. Don enjoyed relaxing on his deck watching the golfers and visiting with them too. He also loved watching trains go by. Don was a sociable neighbor who served as president of the resident’s association for several years.

Don and Louise spent 20 winters in Mesa and Apache Junction, AZ. They were active in their local community, socializing with neighbors, friends and family and taking in the local sights, including the Scottsdale Arabian Horse Show and the Barleen (AZ) Opry, among others.

Don was a member of Lutheran Church of the Good Shepherd in Moorhead and was active in the Helping Hands group. He was a lifelong member of the Kringen Lodge Sons of Norway and was part of a WDAY Veterans Honor Flight to Washington, DC.

Don’s service will be held on Friday, October 28, 2022, at 11 AM, in Lutheran Church of the Good Shepherd, Moorhead. A visitation will take place one hour prior. Burial will be in Freeman Cemetery, rural McLeod, ND. To view the live stream or recording of Don's service go to:  https://www.youtube.com/c/moorheadgoodshepherd

To order memorial trees or send flowers to the family in memory of Donald D. Wickoren, please visit our flower store.