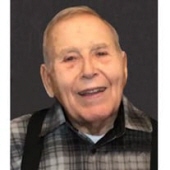 Donald Clark Johnson, age 88, of Fargo, ND, was gathered into the loving arms of his Savior and brought to his heavenly home on Sunday, September 29, 2019.

Don was born on April 3, 1931, in Oakes, ND, to Harvey R. Johnson and Lena (Mary Magdalena Herr) Johnson. He grew up on the family farm in Marshall County, SD, where he learned the value of continual learning, hard work, and faith in Jesus Christ. These values clearly only grew with every year of his life. He had a servant's heart, always ready to help others. He served his family, his friends, his church, and his community through the township board, church board, teaching Sunday School, leading the youth group, and Bible studies.

When Don was 18, he upgraded his private pilot's license to a commercial pilot's license and he purchased an airplane, showing his preference for being in the air. He used his Luscombe for everything from travel to farming, using its skis to bring the cream to the creamery and landing on the nearby slough when the roads were not easily navigated in the winter. He enjoyed piloting a plane for many years and kept reading and learning about aviation the rest of his life.

To serve his country, Don entered the Army in April of 1953 and served until April of 1956, during the Korean Conflict. Following this commitment, he returned to South Dakota to farm. Soon after, he married the love of his life, Melva (Nygaard) on June 21, 1958. They welcomed two daughters, Lori and Lila. Over the next many years, they raised their farm girls, never minding traditional family roles. Everyone helped with the vacuuming, everyone cooked, everyone farmed. Sprinkled throughout lots of hard work were countless family outings, picnics in the north pasture, as much travel as time allowed, and always a focus on spiritual growth. He was a serious steward of the earth and believed in the loving and humane care of animals. Don's favorite part of machinery breakdowns was the opportunity it presented for making tools and designing jigs to make parts to fix it. He repaired many neighbors' machines, as well. He was an expert welder and took the time to teach his daughters the skill of laying a smooth bead with a welding rod or the soldering iron. He took the same care in repairing everything from necklace chains to tractors and other farm machinery.

Don and Melva moved to Fargo in 1985, where he worked in research and development for Webb Enterprises in West Fargo. Following retirement, he continued to design and build as long as he could.

Don had a great love for his family. He enjoyed spending time with his grandchildren and in recent years, two great-granddaughters. He was always supportive in every endeavor they showed interest in, among others, trapping gophers and building stone bird houses.

Celebrations of this wonderful man's life will take place with visitation, Friday, October 4, 2019, at 6:00 p.m. with a service at 7:00 p.m. followed by the memorial service on Saturday, October 5, 2019, at 10:00 a.m., both at Triumph Lutheran Brethren West in West Fargo. Interment of cremated remains will take place at Rose Hill cemetery, Langford, SD, at 3:00 p.m. Saturday afternoon.

Don will long be loved and remembered for his loving kindness, his mediocre jokes, his vast knowledge, and most importantly, his incredible faith in God.

To order memorial trees or send flowers to the family in memory of Donald C. Johnson, please visit our flower store.