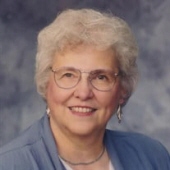 Diane M. Wald, 80, of Moorhead, MN, died July 18, 2020, at Serenity Assisted Living, Dilworth, MN, surrounded by family and under the care of Hospice of the Red River Valley.

Diane Marie Ricard was born November 20, 1939, the daughter of Henry and Ida (Archambault) Ricard, in Crookston, MN. She was raised in Crookston where she attended St. Joseph's Academy, graduating in 1956.

Diane was united in marriage to Leo J. Wald on December 28, 1957, in Crookston. They made their home in Crookston where she worked at the Polk County State Bank until 1959 when she began raising her family. Diane and Leo later moved to Moorhead. As her children began school, she learned the trade of negative retouching. In 1972, Diane began working as a freelance photo retoucher and was able to work from home until she retired in 2003. Leo passed away on June 5, 2020.

She was a member of St. Joseph Catholic Church in Moorhead where she was active with the Charitable Concerns Committee, Resurrection Choir, and served as Eucharistic Minister.

She was preceded in death by her parents; husband, Leo; and brother, Ronald.

A Mass of Christian Burial for Diane will be 10:00 AM, Monday, July 20, 2020 in St. Joseph Catholic Church, Moorhead with visitation one hour prior to her service.
Due to CDC Covid-19 restrictions social distancing and masks will be required.

To order memorial trees or send flowers to the family in memory of Diane M. Wald, please visit our flower store.