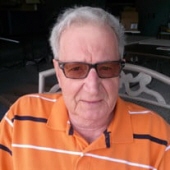 Dennis was born in Shakopee, MN, and grew up in Oakes, ND. He married Deetta Birch with whom he raised their three children, beginning in Fergus Falls, MN. The family later moved to the Fargo-Moorhead area. Dennis was so giving, he would give the shirt off his back to a complete stranger. He loved spending time with his kids and grandkids.

Mark: remembers calling Dad up after work and asking him if he wanted to ride down to Minneapolis in the early hours and pick up a snowmobile. Even after I told him we would leave about 3 AM, he never hesitated or asked why. He would say yes and we would go. We did this around three times and he never complained about my driving too fast on snow packed roads or when we would almost jack knife the trailer after slamming on brakes. He never panicked or complained as long as we would pull over and stretch the legs every 2 hours. I will miss the times we would drive and talk about old times.

Teri: cherishes the time she spent with her dad whether it be their weekend lunches or their adventures to see family in Seattle. She also remembers her son Drew's first hockey practice, grandpa was right there in the stands...his biggest fan.

Keith: will miss the random visits to his home in Alexandria at all hours of the day/night. Dad loved little road trips and stopping for coffee along the way.

Bonnie (daughter-in-law): my dad was having surgery in Billings, MT. I was afraid to drive that, but not your dad. He said "old girl, get yourself to Moorhead and I'll take you." I was so worried we wouldn't get there before he went into surgery. He assured me we would, and we did!! That's the man the old guy was.

A private family graveside service for Dennis will be held.

To order memorial trees or send flowers to the family in memory of Dennis D. Praska, please visit our flower store.