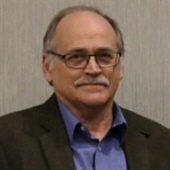 Dennis Clayton Nedrebo was born November 1, 1952, the son of Clayton and Marion (Eggert) Nedrebo, in Fargo. He was raised on the family farm in Argusville, ND, and graduated from Argusville High School in 1970. Dennis then attended North Dakota State School of Science in Wahpeton, ND. After college he began working at Fargo National Bank in Fargo as a loan officer.

On April 14, 1979, he was united in marriage to Valerie Klassen in Elim Lutheran Church in Fargo. They made their home in Fargo where Dennis began working for Scheels. They moved to Argusville, ND, and Dennis went to work for Overhead Door in Fargo where he worked for 32 years, before retiring in 2021. Dennis and Valerie later moved to Fargo where they have since made their home.

Dennis enjoyed riding his motorcycle and spending time with his children and grandchildren.

He was preceded in death by his mother and father-in-law, Victor and Beverly Klassen; and grandparents, Bennie and Jennie Nedrebo and Walter and Bertha Eggert.

To order memorial trees or send flowers to the family in memory of Dennis C. Nedrebo, please visit our flower store.