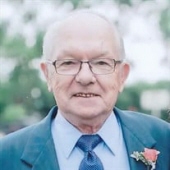 Delayne Rae Halverson was born August 9, 1938, in Fargo, ND, and was adopted by George and Grace (Hanson) Halverson. He was raised on a farm near Downer, MN, and graduated from Barnesville High School in 1956. After graduation he attended North Dakota State School of Agriculture (NDSU) in Fargo.

On October 25, 1958, he was united in marriage to Dorothea Murchinson in Fargo. They made their home on a farm near Downer where they farmed and raised cattle for many years. He later went to work as a parts man for RDO in Moorhead. In 1997, Delayne and Dorothea moved to Moorhead and he then worked at the Hjemkomst Center as a maintenance technician until retiring in 2014.

He was a member of Lutheran Church of the Good Shepherd in Moorhead.

Delayne was preceded in death by his parents.

A Gathering of Friends for Delayne will be one hour prior to his memorial service.

Burial will take place in Barnesville City Cemetery, Barnesville, MN, in the spring.

To order memorial trees or send flowers to the family in memory of Delayne R. Halverson, please visit our flower store.