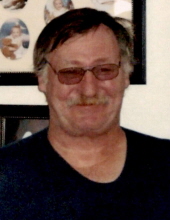 David James Jacobson was born on May 9, 1949, in Moorhead, MN, to Lowell J. and Romae L. (Ohmstead) Jacobson the sixth of eight children. He attended school in Fargo and graduated from Fargo North in 1967. David enlisted in the US Army at a young age where he was an Army mechanic during in the Vietnam Era, spending time overseas in Germany. He was honorably discharged in April 1975.

David had a passion for stock car racing. You could always find him at a local track with his infamous #15 stock car being hauled behind one of the many different vans he owned over the years! David raced for many years and would always sit down after his race and ask his fellow drivers “Did I pass you?” David had to stop racing due to health reasons but passed his infamous #15 onto his nephews so that he could still be part of the team. If you were sitting in the grandstands, you could always see David pacing the backstretch wall if that #15 was having a good run or going to win!
David was an avid Pepsi drinker, aluminum can collector, and always trying to save a penny any which way he could!

Uncle David was a kind soul and was quiet and never said too much. He was truly one of a kind and will be missed.

He was preceded in death by his parents, Lowell and Romae; brother, Robert Jacobson; and sister, Karen Brown.

A Celebration of David’s Life will be 10:30 AM, Friday, July 1, 2022, in Korsmo Funeral Chapel, Moorhead, MN, with a Gathering of Family and Friends one hour prior to the Celebration. Burial with Military Honors will follow in Riverside Cemetery, Fargo.

To order memorial trees or send flowers to the family in memory of David J. Jacobson, please visit our flower store.