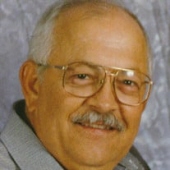 David Arthur Nobis was born to Robert and Helen (Baldyga) Nobis on April 28, 1944, in Lisbon, ND. He grew up and graduated from high school in Moorhead. In June of 1962, he and his friend, Keith, enlisted in the U.S. Navy and served honorably during the Vietnam War. David was incredibly proud of his military service.

After returning from war, he earned his bachelor's degree from Moorhead State College and started working for Northwestern Bell. He continued to work in the same field though the name of the business changed several times. In his mid-40s, David went back to school and earned his master's degree from NDSU. He met his wife, Margie, during this time and they were married on October 16, 1986. They both already had children and Margie's children were treated as his own. He continued to work until he retired at the age of 55.

During retirement, David and Margie enjoyed a full retirement of traveling to every state except Alaska. For 10 years, they would go to Nesquehoning, PA, during the winter. Their family went on several vacations together, the most memorable was two years ago to New Orleans. David took cooking courses and worked as an addiction counselor.

David loved to bake (especially bread), cook, tie flies, and fly-fish. He enjoyed photography and was incredibly proud of his many woodworking projects, which included quilt racks, children's high-chairs, and a magnificent gun cabinet.

It was almost impossible to go somewhere with David and not see him come across someone he knew. He never complained, though his health issues would have allowed him many opportunities. He was accepting, loving, reliable, and kind. David will be deeply missed and always loved.

Visitation will be from noon to 1 PM, followed by the funeral at 1 PM, Saturday, January 12, in Korsmo Funeral Chapel, Moorhead.

In lieu of flowers, donations may be made to the American Diabetes Association.

To order memorial trees or send flowers to the family in memory of David Arthur Nobis, please visit our flower store.