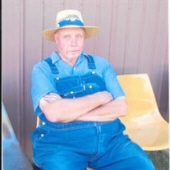 In an old quaint farmhouse along the banks of the Red River east of Christine, North Dakota, on May 6, 1937, Daniel Anderson entered this world. His birth was likely one of the last home births in this area. He grew up on the family farm that his grandfather homesteaded in 1879, after immigrating from Sweden.
He attended school, first in a country school southeast of Wolverton, Minnesota where his favorite teacher, Cecelia Lindgren taught; then in a country school east of Christine, where Mae Edenstrom taught; and then in the city of Wolverton where he attended through 8th grade. School choice was an option even back then.

He worked on the farm with his father and uncle, raising crops and animals with lots of hand labor and antique machinery. Steam threshing was the method of harvesting until 1967, and the Andersons were the last steam threshers in this area. Modern conveniences were considered unnecessary until long after their availability. Electricity was not installed until 1970, and indoor plumbing was never installed while living on the farm. Improvising provided for their needs.


Daniel was a proud member of the Western Minnesota Steam Threshers Reunion at Rollag, Minnesota, attending every year since its beginning in 1954, and only missing the last year due to his health. He operated his rare Buffalo Pitts Straw Burner Steam Engine there. He made many friendships with fellow steam threshers there.

Daniel also was a grave digger for Eagle Cemetery and other cemeteries in the area, hand digging about 100 graves during his life. He also faithfully raised the flag at Eagle Cemetery for every burial and holiday for about 30 years. He was a member of the Eagle Cemetery committee and had a keen memory of pioneer history in this area.

Daniel attended Wolverton Evangelical Free Church and Sunday School as a child. He was a 1950 graduate of Pastor Theo Ramsey's Bible Instruction class. He also attended the Young People's Society there and was appointed secretary in 1953, and served as president in 1954. He was taught well and remembered what he had been taught. But it was not until later in life, at age 50, when listening to Christian radio, he realized he had not sincerely asked Christ to be his Savior and did so.

Daniel provided care for his aging uncle, father, and mother for many years on the farm. As Daniel himself aged, he struggled to stay on the farm where he had lived his entire life. But finally, he realized he needed additional care. He moved briefly to Wahpeton, North Dakota, before entering Elim Care Center in Fargo, North Dakota, in February 2014. His pioneer homestead auction was held in July 2014, and all his antiques were sold. People came from 13 states and 2 Canadian provinces.


Daniel lived the last 7 years at Elim and Pioneer House in Fargo. He was in Hospice care the last 1 ½ years. He died early Saturday morning, December 5, 2020, in Pioneer House, at the age of 83 years, 6 months, and 29 days.


Daniel did not live a perfect life, but lived simply, and simply trusted the Lord for his salvation.

The funeral service will be Friday, December 11, 2020, at 2:00 PM at Eagle Valley Evangelical Free Church, 2 miles east of Christine, North Dakota. Visitation will begin at 1:00 PM at the church with burial to follow the funeral at Eagle Cemetery.

CDC guidelines and social distancing will be observed. In lieu of flowers, memorials are suggested to Eagle Cemetery, Western Minnesota Steam Threshers, or donor's choice.

The service will be recorded and available on their website no later than Sunday morning.

To order memorial trees or send flowers to the family in memory of Daniel Anderson, please visit our flower store.