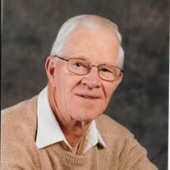 To view the recording of Clyde's Celebration of Life click the following link:
https://portal.midweststreams.com/services/iframe/21161

Clyde Wydell Hendrickson, Moorhead, MN, passed away peacefully at his home on Tuesday, June 15, 2021. He was born January 14, 1935, in Fosston, MN, to Norman and Alice (Birkland) Hendrickson. He grew up on the family farm near Gonvick, MN.

Clyde graduated from Gonvick High School, Gonvick, MN, in 1953, where he played basketball and football. After graduation, Clyde worked on the family farm and also drove a dairy truck for the creamery in Gonvick.

On April 28, 1956, Clyde married his high school sweetheart, Patricia L. Strand, "Patsy" as she was then known. They moved to Schroeder, MN, where he was employed as a carpenter's assistant, helping to construct the taconite loading docks on Lake Superior. When this job ended, he found work as a machinist in Minneapolis, MN, for Advanced Floor Cleaning in their equipment division. When this company expanded to Colorado, he moved his growing family to the Denver, Colorado, area where his youngest child was born. The family later returned to the Minneapolis area where Clyde was first employed as the Grounds and Building Manager for several Christian facilities including Peace Lutheran Church, Coon Rapids, MN, then Red Willow Bible Camp, Binford, ND, and later at the Association Free Lutheran Bible School, Plymouth, MN, where he was employed for twelve years until his retirement.

Upon retirement in 2000, Clyde and his wife, then known as Pat, purchased a home in Parkers Prairie, MN. Before moving, they flew to Alaska with their family to participate in Pat's family reunion. Upon returning, they completed the move to their new home. Clyde, not one to let grass grow under his feet, immediately set about remodeling it until it met his specifications. Clyde was not a man of leisure and quickly began working again. This time he took on part-time work at Mount Carmel Ministries Camp, Alexandria, MN. Among other things, Clyde employed his woodworking skills for Mount Carmel. He made wooden crosses and advent candle holders, donating them to Mount Carmel where they were sold to raise money for the camp ministries. Between home remodeling and woodworking, he and Pat also found time to cook, serve meals and wash dishes at the Senior Center in Parkers Prairie. His wife, children, grandchildren and great-grandchildren were delighted to slow him down a bit by hosting a surprise 80th birthday party at a local hotel on his birthday-weekend in January 2015. In August 2017, he and Pat moved to an assisted living facility in Moorhead, known as River Pointe/Riverton Suites, where they were living at the time of his death.

Clyde was a religious and spiritual person and a devoted family man. He was what others would call "the salt of the earth." He did not smoke, drink, curse or gossip. He worked hard but came home, often exhausted from manual labor, yet still had a smile on his face and kind words for his family. He enjoyed his time with his wife, three children, and later with his grandchildren and great-grandchildren. He loved working with his hands, frequently crafting items from various species of wood, particularly oak and walnut. He enjoyed building, repairing and even cleaning items. He built kitchenettes for his daughter and then his granddaughter. He refurbished his daughters and gave it to a great-granddaughter who delighted in preparing â€˜pretend breakfasts' when visitors arrived. As a husband and father, Clyde enjoyed playing softball, basketball, volleyball, and board games; but above all he relished his many games of pinochle with family and friends. One of his most enjoyable times was teaching his two grandsons to play pinochle. He created his "best-card-partner-ever" with younger grandson, Andy. Their crowning achievement came when he and Andy both received double ropes on the same day while partnered against granddaughter, Sarah and older grandson Luke. The event was commemorated with a photograph. Clyde framed the picture, a copy of which was presented to Andy several years ago. It shows each grinning from ear to ear with their winning hands, forever documenting this extremely rare event. Clyde was very quick-witted. His family came to refer to some of his comments as "Dumb Dad Jokes" but they enjoyed his quips and jokes--almost as much as he enjoyed telling them!

Clyde has physically left us and gone to his Heavenly Father but he will be forever remembered for his love, kindness and respect. He affected so many lives with his dependability, work ethic, humor and caring nature. His family adored him and although they grieve his departure he left a legacy for which every family member can be proud.

Clyde was preceded in death by his parents; a son, Mark Hendrickson; and a brother, Oris Hendrickson, all of Minnesota.

A Celebration of Life service for Clyde will be Saturday, June 26, 2021, at 11 AM, in Korsmo Funeral Chapel, Moorhead, MN. Friends may gather one hour before the service.

To order memorial trees or send flowers to the family in memory of Clyde Hendrickson, please visit our flower store.