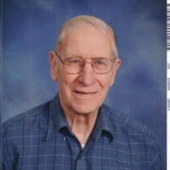 To view the recording of Clifford's service, click the following link: https://portal.midweststreams.com/services/iframe/19301

Clifford was born in Fargo on September 23, 1930, to Christian and Celia (Blouin) Anderson. Raised on a farm near Comstock, where he received his education and was confirmed in his Christian faith at Rustad Lutheran Church. After high school, Cliff joined the Army National Guard and served in the Korean War. An avid sports fan, he said the best thing about returning home from his service in war, was that he made it home in time to participate in the local softball game. Cliff played for and later managed Monte's softball team of Comstock. The passion didn't stop there, he would spend years as a fan, faithfully attending his grandchildren & great grandchildrens sporting events. In addition to sports, he never forgot his farming roots and tended a garden for many years. Cliff's talents were many and included National Guardsman, glazier for Fargo Glass & Paint, gardener, friend, beloved husband, step-father, uncle, grandfather, and great-grandfather.

On November 23, 1979, Cliff was united in marriage to Patricia Anderson at St. Joseph's Catholic Church in Moorhead. He was a loving and devoted husband for over 30 years. In between dances, Wednesday trips to the grocery stores, and numerous clean windows, Cliff and Pat were surrounded by their loving family. Many will recall their familiar faces at every family event, complete with iron pressed clothes in the Buick and homemade food in the trunk.

He was preceded in death by his wife, Pat; parents; brothers, Donald and Myron; and sisters Joan Bye and Jean Brakke.

A Memorial Service will be held on Monday, April 26, 2021, at 11am in St. Cecilia's Catholic Church, Sabin. Visitation will be held Sunday, April 25, 2021, in Korsmo Funeral Chapel from 3pm-5pm with a 5pm Prayer Service. Interment will be in Moorhead Memorial Gardens, Moorhead.

To order memorial trees or send flowers to the family in memory of Clifford A. Anderson, please visit our flower store.