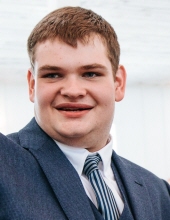 Christian David Juve was born February 28, 1999, to David and Vicki (Pratt) Juve, in Westerville, OH. His early season of life appeared normal, however, at the age of about 18 months, it was determined that he had global developmental delays which included cognitive issues, motor skills and lack of verbal skills.

In the midst of his challenges, Christian loved life and loved being around people. He was vibrant and had a charisma that engaged people. He loved music and was an inspiration to many when it came to celebrating during worship. He was part of the Westerville Challenger Baseball team for about 4 years in Ohio and went to state tournaments twice.

The family moved to Fargo ND, in 2012, and Christian struggled to find his way for the first couple of years. He eventually moved to the Anne Carlsen Center in Jamestown ND, and flourished under the dedicated guidance and tutelage of the staff. After he graduated in 2020, he moved to Devils Lake ND, and was part of the REM community.

Throughout most of his lifetime, he was accompanied by staff for daily activities when he was not in school. He made friends with many, many dedicated people who served him and helped him function in his daily routines. We are forever grateful to all of those who served him well and provided the help he needed including Community Living Services, Anne Carlsen Center, and REM of Devils Lake.

Some of Christian’s favorite activities included swimming, swinging, dancing, playing basketball, and watching football. Favorite movies and shows included SpongeBob SquarePants, Spirit and Kung Fu Panda. Favorite foods included pancakes, hamburgers, ice cream cones and crunchy foods. He maintained an extensive cap collection for a long time and was often the recipient of caps from people who knew him or, on occasion, strangers. He enjoyed watching airplanes, trucks and motorcycles. He liked loud, vibrant music and could dance for hours – literally – without getting tired. He liked to look good and particularly liked shoes!

Christian will be remembered for the contributions he made as he had a remarkable ability to connect with people and help them through difficult seasons. He was sensitive to hurting people and ministered God’s love to them in the way he was designed. Though he could not speak, his warmth and affection were notable and easily recognizable to those that were involved with his life.

He was welcomed into the arms of Jesus during the night of March 23, 2022. He will be missed greatly however, he is now free and fully alive in God’s eternal presence. We look forward to seeing him one day in his completed state.

Christian is survived by his parents, David and Vicki Juve of Fargo; sisters, Morgan (Joel) Luing, and Alexandra Juve (boyfriend, Austin Cote); and niece, Payton. He is also survived by his grandmothers, Jeanne Juve, Lois Pratt, and “grandma Jacki,” along with many other aunts, uncles, cousins and friends. He was preceded in death by his grandfathers, Rev. Duane Juve and Wayne Pratt.

Christian did not qualify for life insurance, therefore memorials are encouraged in order to help with expenses. Memorials will also be directed to non-profit organizations that minister to those in the special needs community. They may be sent to Christian's family in care of Korsmo Funeral Service. 409 - 8th Street South, Moorhead, MN, 56560.

Special thank you to Korsmo Funeral Service for their contributions and Bethel church for making this service possible.

To order memorial trees or send flowers to the family in memory of Christian D. Juve, please visit our flower store.