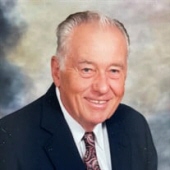 To view Jack's service via livestream on Friday, October 1, please follow the link below:
https://portal.midweststreams.com/services/iframe/24225

Charles John Breneman Jr., was born March 11, 1925, in St. Paul, MN, to Charles John Sr. and Rose (Krumpelmann) Breneman. Jack grew up in St. Paul and attended Cretin-Derham Hall High School graduating in 1943. Following graduation, he served in the U.S. Army Air Corps in the Pacific during WWII. After the war, he attended the University of Minnesota.

On June 28,1952, Jack married Margaret Ann Waxweiler of St. Michael, MN, who would remain the love of his life and to whom he was forever devoted. They celebrated 63 years of marriage before his wife's passing in 2018. Minnesotans all their lives, they lived in St. Paul, Roseville, and Northfield, before permanently making their home in Moorhead in 1968. Jack worked as a food broker in the tri-state area and opened Timmons-Sheehan of Fargo and was co-owner.

His favorite pastimes included hunting, fishing, and boating, and later in life he developed a love of golf and skiing. He started the Moorhead Chapter of Ducks Unlimited and was a founding member of the Leech Lake Yacht Club. During the winter months when Jack could not be outdoors, he would paint many scenes which reflected his love of nature. The walls of his children's homes are adorned with his beautiful paintings. Jack was a very outgoing person and most happy when sharing his stories over a drink or two with friends and family. The stories of his annual Hochzeit parties at Leech Lake will live on for many years. But the most important thing to him was always his family. His children will forever remember the love and care he showed to them throughout his life.

The family would like to extend their appreciation to the staff at Ecumen Evergreens of Moorhead for their kind and patient care given to Jack.

To order memorial trees or send flowers to the family in memory of Charles "Jack" Breneman Jr., please visit our flower store.