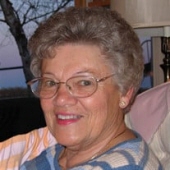 Caroline Ann (Polansky) Wettstein was born November 2, 1931, in Lidgerwood, ND, to John and Susan (Arth) Polansky. She attended school in Lidgerwood, until her mother's death when she was needed on the farm to care for her siblings.

On April 24, 1950, she married Charles Wettstein and they made their home in Fargo, ND. In 1953, they moved to Moorhead, MN, where they raised their family. Caroline was a devoted wife and mother and also worked for Moorhead Public Schools. She was a very caring and loving individual who always put others before herself. She enjoyed crocheting afghans for each of her children, grandchildren and great-grandchildren.

Caroline was an active member of St. Joseph Catholic Church, including life time member of Christian Mothers and Catholic Daughters. Summers were spent at West McDonald Lake where she enjoyed the lake life. In retirement, Caroline and Charlie enjoyed winters in Brownsville, TX, and traveling the U.S.

Caroline was preceded in death by her husband, Charles Wettstein; three grandchildren, Holley and Heather Meyhuber and Christopher Wettstein.

A Visitation for Caroline will be Thursday, from 5 PM to 7 PM, with a Prayer Service 7 PM, in Korsmo Funeral Chapel, Moorhead.

To order memorial trees or send flowers to the family in memory of Caroline A. Wettstein, please visit our flower store.