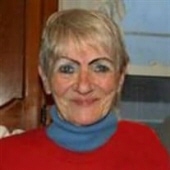 Mom was born Carol Marie Erickson on November 29, 1937, to Oscar and Selma (Westlund) Erickson in Lake Park, MN. She was the youngest of six children. Mom loved telling stories about growing up on her family farm. She was quite proud of the fact that she was a tomboy~ she'd never turn down a direct challenge from one of her older brothers to do something daring.

Baking and cooking held no interest for her ~ being outside doing farm things with her dad made her happy. At age fifteen, her family moved to Moorhead, MN. This was the first home where she enjoyed running water, electricity, and a television set! It was also here that she discovered roller-skating at Bud's Roller Rink. She was there so often that Julius Granfor offered her a brand new pair of skates if she agreed to pay him 15 cents a week until paid off. She became so good on skates that she could 'couples dance' on them effortlessly.

On October. 5, 1957, Mom married our father, Paul Haakonson, in Moorhead. Together, they had three children. Years later, in February 1977, she married Gene Harstad.

In her later years, if Mom could have chosen what her perfect day would look like, we believe it would have been spending time with family and friends at the lake fishing, followed by sitting around the bonfire talking and laughing, and listening to country music. She always appreciated the simple things in life.

Those that Mom have hopefully reunited with in Heaven are her parents; her five brothers and sisters, Gordy, Arnold, Roger, Irene and Betty; a son-in-law, Sid Long; two infant grandchildren, Lexi and Jordan Peterson; and her dear great-nephew, Lon Asplin.

Mom, besides your daily presence with us, we will miss the unconditional love you had for us all. 'Grief is just love with no place to go,' Jamie Anderson.

In lieu of flowers, please donate to your local food pantry.

A Celebration of Life Service will be held later this summer.

To order memorial trees or send flowers to the family in memory of Carol M. Harstad, please visit our flower store.