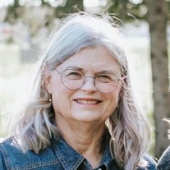 Carol A. Hovdestad, daughter of Robert and Ann (Prosby) Hovdestad, was born June 19, 1951, in Fargo, ND. She was raised on her parents' rural Felton, MN, farm with her five siblings.

She married Edward J. Sellent of Sabin, Minnesota, on August 2, 1975, at St. John the Baptist Catholic Church in Georgetown, Minnesota. They had two daughters. Edward preceded her in death in 1987.

Carol worked at Shotwell Floral of Fargo, was a co-owner of Wild Birds Unlimited of Moorhead, MN, and later worked as a paraprofessional at Moorhead Senior High School. She had many interests and was always busy baking, crafting, gardening, and solving sibling decorating and store display problems.

CDC and Minnesota guidelines will be followed; therefore, Masks and social distancing will be strictly enforced. Due to CDC capacity limits at the church, you may watch Carol's service via livestream.

To watch Carol's service via livestream, please follow the link below: https://portal.midweststreams.com/services/watch/2SpH6845T

To order memorial trees or send flowers to the family in memory of Carol Ann Sellent, please visit our flower store.