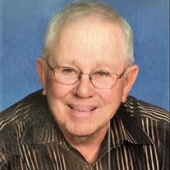 Burton C. Buzick, 81, of Moorhead, MN, passed onto eternal life on February 27, 2019.
Burt was born November 4, 1937, to Clyde and Cora Buzick and grew up near Argusville, ND. During his high school years, Burt worked to help support his widowed mother and his siblings. Soon after graduation he took a liking to an attractive Fargo Theater usher, Sandra Semling, and they married in 1959.

Together they filled their home with three kids and their garage with fast-moving motorized vehicles-cars, snowmobiles, go-carts and the like. The family also spent many years around sprint car race tracks and at Big Cormorant Lake.

In 1976, Burt started Red River Excavating, a business that is run today by his two sons. When the demands of company ownership eventually let up, he and Sandra spent time following their kids' and grandkids' activities. He retired officially in 2000 but continued to visit the shop daily until just weeks before his death.

After 54 years of marriage, Sandra passed away in December 2013.

Carol Meyer brought a new spark to Burt's life and they married on July 8, 2018. They lived in Moorhead until his death.

He was preceded in death by his first wife, Sandra; his son-in-law, Phil Ostlie; his parents; a sister, Marlys Martin; and two brothers, Curtis and Arthur Buzick.

Visitation will be Monday from 4 PM to7 PM, with a prayer service at 7 PM, in Korsmo Funeral Chapel, Moorhead.

His funeral service will be Tuesday, March 5, 2019, at 2 PM in Our Savior's Lutheran Church, Moorhead.

To order memorial trees or send flowers to the family in memory of Burton Buzick, please visit our flower store.