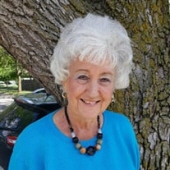 Bonnie Mae (Lenius) Helgren was born June 20, 1932, in Dilworth, MN, to Clifford and Evelyn (Garrow) Lenius. Bonnie was raised and educated in Dilworth where she graduated from high school in 1950.

On April 8, 1950, Bonnie was joined in marriage to her grade school sweetheart, Paul Helgren. Bonnie and Paul made their home in Dilworth on the Helgren Family Trucking Farm where they both worked and raised their three children.

In 1979, they left the family farm and moved to their home in Moorhead, MN, where they would both live out the remainder of their days. Paul died January 17, 2001.

Bonnie died February 3, 2021, at her home in Moorhead, at eighty-eight years of age. After more than a decade of being plagued by Alzheimers and dementia, Bonnie fell and broke both her right arm and hip. Bonnie had been under hospice care in her home at the time of her death.

Bonnie was preceded in death by her parents; brother, Richard; husband, Paul; and son, Ron.

Visitation for Bonnie will begin at 12 PM, with a funeral at 1 PM, Thursday, February 11, 2021, in Korsmo Funeral Chapel, Moorhead. Burial will follow in Moorhead Memorial Gardens.

Current CDC guidelines will be in effect, regarding masks and distancing.

To order memorial trees or send flowers to the family in memory of Bonnie Helgren, please visit our flower store.